This story is an edited version of Richard’s sermon at St. Martin-in-the-Fields, London, UK on February 19, 2017.

Before I became an Anglican priest I was a teacher of English and Drama and for four years I was a teacher in Yogyakarta in Indonesia at a Jesuit Teacher Training College. One of my students was a man called Agung. He was poor and I remember him telling me that his mother had sold her wedding ring in order to pay his admission fees to the university. In my first term of teaching his mother died and Agung had no financial support to continue so I offered him a place to live at the house in the village just outside Yogyakarta where I was living. We soon became very good friends. He had, how shall I put it, a nonchalant, philosophical attitude about life. I was only being paid local wages as I was working for voluntary Services Overseas (VSO) but we survived. And our house is the village became a wonderful place for gatherings, hospitality, creative ideas and discussion. 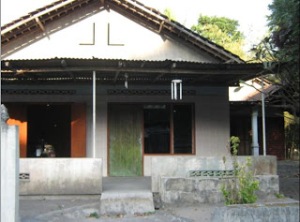 I remember Agung built a brick bed from discarded bricks and planks of old timber with a thin mattress on top. When I set off anywhere he would call out: “Jangan lupa, satu nasi dibungkus buat Agung.” He meant don’t forget to bring me a parcel of food back – there was delicious street food – Indonesian curries with rice and sambal (hot sauce) wrapped up in a banana leaf with the stem tucked back and pushed through the leaf so that the parcel was secure. Of course I didn’t forget him. But after several years of this it was sometimes hard especially at the end of the month when money was short. “Don’t worry” Agung would call out from his brick bed where he lay studying – “God will provide.”

“The problem is” I remember one day shouting back “It’s not God who is providing – it’s me.” To be honest it was not the providing that bothered me. In fact I loved helping him – he was bright and creative and I could not have asked for a better or more loyal friend – no it was not the giving it was the lack of thank you. Why did he never say thank you? And he never did. Even though I paid for everything. And one day it just got to me:

“You know Agung in all these years I’ve paid everything and you have never ever said thank you.” Agung was quiet for a moment and then he said:

“I would love to be able to give to you as you do to me, but perhaps it should be the one who gives, who also says thank you.”

“That’s rich!” I said, “You mean not only do I have to pay for everything but I also have to thank you for receiving it!”

“Yes” he said. “In your English language class what did you teach us? You said when you give someone something and they accept it you reply to them – “It’s my pleasure.” Why do you say that? Are those just meaningless words? It is your pleasure to give. I have no money to give at the moment, and I wish I did – but it is my pleasure to be your friend and brother in this country where you have come to live.”

Thirty years later Agung and his wife Lily came to stay with me here in London. It was like old times though the roles have now changed. Agung wanted to pay for everything. When he left, he left an envelope on the table. In the envelope was US$1,000. The card read: “Mas Richard”, which means “my dear brother” – “please accept this gift to help others like you helped me…. It’s my pleasure.” I held the envelope speechless, my eyes misting up remembering back to those days in Yogya where we became who we are. It was my pleasure too to be able to give, if only I had done more. I have tried to learn form that and remember that ever since. My dear friend Agung and many others were my teachers.

I have never forgotten these truths:

It’s my pleasure – when we give we give of ourselves, we give what is alive in us. We are responding to the very nature of God – a God who gives all good things. The greatest poverty of all is to be deprived of the ability to give. How can I give more? We don’t often appreciate the joy of giving. The despair that often haunts us in the western world is that we will be forced into dependency and poverty and perhaps this is the fear that prevents a greater generosity of life.

I have noticed so often in my life how people come alive through their generosity. Have you ever noticed at Christmas it’s actually far more exciting giving a present than receiving one? Look at the faces of the ones who are giving a carefully chosen and wrapped gift – it is their faces that are full of joy. I have noticed at our refugee group it is those guests who have become hosts – who want to help with washing up and clearing trays and wiping tables and serving the food – it is they who seem to shine with a Spirit of hope and grace. Yes grace – because that is what grace is – a free gift of one self – the sharing of unconditional love.

The things we should be most grateful for we sometimes take completely for granted. I mean how many children spend much of their childhood feeling grateful to their parents? How many thank their parents for taking them to school or driving them to football, or to go swimming, or for getting up early to prepare their packed lunch or for trying to help them do their homework? It’s only much later that we may learn what gratitude really means.

We often think that giving is about those more obviously recognized acts of giving, which may draw attention to the giver. Like paying the bill in the restaurant while everyone else protests, or giving money on Red Nose Day while watching TV with family, or being very generous in the pub while forgetting to buy the milk and the toothpaste. One of the clients at the Connection once said, “There’s plenty of kindness to the homeless people on Christmas Day – it’s the other 364 days that are the problem.”

I remember a single mum telling me about bringing up her daughter. She said that when her daughter’s father takes her out he buys her all the treats, the ice cream, the trips, the new clothes, the toys, but it’s me, she said who pays for the nappies and the cream for the nappy rash, and heating, and the gas, and the child care so I can go to work and earn enough to provide the essentials. Though of course if I asked her, I know she wouldn’t change roles for the world.

God’s generosity is not just about wow look at me generosity – though there are times for that, it’s also about the routine essential generosity. The generosity that keeps you turning up and keeps you giving because you know that this is the most precious thing in your life. And it can be no other way. The generosity that says I’m going to do the hard thing of being there for you even when it’s tough and I’ll try not to let you down. Because….because I love you. I love you unconditionally, although of course you don’t say that – it’s too deep for that – but that’s the pulse beat of your heart.

Pictures for this story are uploaded from google images:

The purpose of this blog is to collect and share stories from and about people from various cultural backgrounds and values. We expect that our contributors and readers will gain a better understanding of cultural similarities and differences among people, and be able to appreciate all of it. This blog is from the readers to other readers.

Thank you,
The StoryLighthouse Team